Somewhere to let us know of any bargains you've spotted whilst shopping!
Top

Rare trip to Morrisons, sadly they didn't have any of the sourdough batons that I was after. However I'm pleased to see that their butter is still 15p cheaper than everywhere else, at £1.45.

Also they've got a promotion on Wolf Blass that Stokey recommends, £6 for Cabernet Blanc, Cabernet Sauvignon and Chardonnay. Also Montelciego Rioja Reserva at £6.

Surprised to see they've also got Gochugang in stock, that is the first time I've seen it in a supermarket for many moons.
Top

Talking of Morrison's, I notice they have a fair presence on Amazon's food section now, so clearly trying get a foot in all internet doors.

It's said that M&S being at the back of the pack in getting online was partly the cause of their downturn. So maybe Morrison is the one to watch, although a news reporter reckoned (from some statistic or another) that Ocado could be the scooper-upper of M&S's now not so special food and waning food market share.

I do wonder if Morrison's is now the most bargain-led one, i.e. "loss leader" items with other item prices hiked. Either that or some of their suppliers must be being royally shafted.
Top

Morrison's claim actually to support their UK suppliers better than other supermarkets, I haven't been into it so I don't know how true that is, certainly they pay above minimum for some milk and take the whole crop of veg, so not leaving the ones that don't fit the grading system to rot. Their Wonky veg are goid, and often better for me as a one person household as often not in the least wonky, just smaller and cheaper than those that made the grade. Last time I got a bag of lovely tiny red onions for 42p and a really good cauli, about 4 portions, for 75p
Top

I did wonder if wonky were simply marketing smoke and mirrors, but they do genuinely seem to be selling differently sized or shaped produce at a lower price, so fair play. I bought some English strawberries in Tesco the other day, again they were 'perfectly imperfect' or whatever the Tesco version of wonky is, but very nice.

It's a horticultural/agricultural fact that the highest yield per acre of several vegetables is achieved at high planting densities producing smaller veg. This can be marketed to advantage for some things - 'baby' carrots for instance, but for onions the highest crops are a bit smaller than customers generally like.
Top

I was thinking of that onion business on my Morrisons trip. They had ginormous onions at 50p each, but the loose onions were really weeny (seems to be true a lot recently), whereas the prepacked onions were the perfect size for me, but pricey.

Rather than pay over the odds for decent sized onions, I left it until my next Tesco trip, although their loose onions vary too.

Just went to Morrison's
Every Bank Holiday it seems not to occur to them that they will run out of stuff - they are not very good at jit (just in time) logistics it seems
However, I managed to get a nice little Del Monte pineapple for 50p, it was marked 74 p but went through the till at 50

And the nice thick Lancashire Farms yogurt is down to £1 per kg, popular with those shopping for Ramadan / Eid (though Eid is not until 15 June)
Top

I see it's a quid at Tesco too. However there's an odd emptiness in the egg aisle at the moment, it's the third day in a row there's been no eggs in the huge bays (Tesco), just the odd few on the shelves. I'd be interested to see what's behind that, maybe a distribution cockup, rtaher than a deliberate removal from the aisle.
Top

Exciting offer featured in Holland & Barrett's latest ad, they're selling 48p's* worth of turmeric for £6.99 instead of their usual price of £15.99 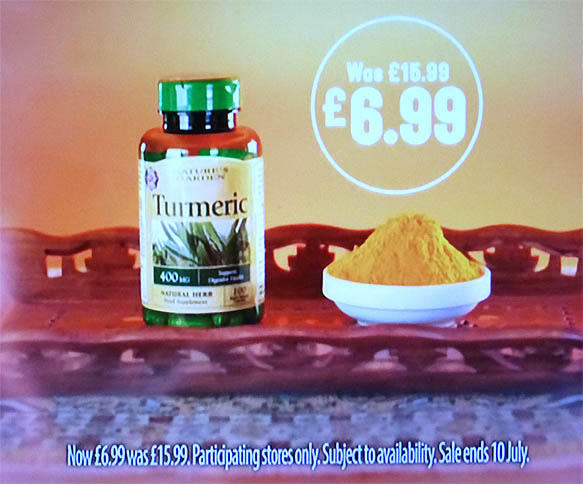 Ha!
My husband always has been a vit/ pill taker. Zinc = saves us a fortune in tissues as it stops his nose running.

I've been promising myself to take Vit D pills. An osteoporosis specialist I paint with recommends it.

Yes vitamin D3 is important Gill, but we probably don't need to take it on sunny days. Zinc always brings my sense of smell back, but I get it from the Vitabiotics vits and minerals that I take.
Top

Gillthepainter wrote:Ha!
My husband always has been a vit/ pill taker. Zinc = saves us a fortune in tissues as it stops his nose running.
...[cip]...

[my bold]
Without getting into medical stuff, your hubby might like these Presto German-made tissues, which I've just bought and recommend as not dusty at all. Yes, sold as 12 boxes, but that's not many hay fever-wise: https://www.amazon.co.uk/Amazon-Brand-P ... al+tissues
They also do a 3-ply version that'd be adequate outside hay fever time.
Top

Thanks Jeral. That's very thoughtful.
We do have Amazon Prime, which is jolly useful on occasion.

Renee. I shall ask the consultant how much to take daily.
And when. And use it in my daily routine. Even though I'm as strong as an ox

Tesco have got the 1kg trays of cherries for £4 back in - I bought a tray this afternoon and half have gone already! They're really big and tasty and as far as I can see, no dodgy ones in there at all.
Top

I’ll be looking out for the cherries then

I bought some Morrison’s Wonky Avocados, they work out about 25p each. They don’t look obviously wonky but are quite small with a normal sized stone and a thinner than usual layer of fleas, (spell checker, meant flesh of course) which means they are just the right size for a single helping.

Also bought 3 bags of fish fillets for £10 in Iceland, trout, cod, and tuna. The tuna are small steaks but really nice for a little nicoise. Thought fish fillets would be easy to cook in hot weather
Top

Black Friday today. To be taken with a pinch of salt of course.

I haven't seen anything of interest yet, but please say if you see something we really cannot live without.
Top

I though Black Friday was next week, 23 November as it’s the day after Thanksgiving? Though I know some retailers are running specials all week
Top

Amazon's started already - £15 off TV stick, think it's first generation, no idea if it's worthwhile.
Top

Curry’s told a Wildie buy their TV this week as the price won't change on Friday.
Top

It seems a lot of good, but pethaps not the most dramatic offers will run Friday to Friday, especially on clothes and housewares