Its been very wet here this morning. Next door neighbours have outside lights set to come on at dusk to dawn. They turned themselves back on at 8.30 this morning! Big puddles in the lane so might need waterproofs on if I go for a walk. The good news is that OH gave the outside furniture a coat of oil over the weekend and I can see that the rain hasn’t soaked in.

Think I’ll be making a soup today, lots of leftover veg and a box being delivered tomorrow.

A quiet day for me but I’m sure I’ll find things to fill it.
Have a good day everyone.
Top

Earthmaiden wrote:Talking of banking online. I don't understand why, if I log into my account on my laptop I have to remember a long numerical code and letters from a 9 character password and then sometimes answer some security questions and tick that I've read updates but on my phone app only need a simple numerical code of my choice to access my account and don't even appear to need a card reader to set up payees. They say the phone app is more secur

ch more vest passwords etc from a phone, but I did need to use my long bak number to set up the phone app, and I log in with touch id
I can set up payees very easily on the phone but there's a limit on how much I can transfer to a new phone payee, or indeed ot any account without 2 factor authentication, it's great for small payments but for anything major I have to go back to pc and card reader

I hate NatWest Windows site, I find it illogical
Top

KeenCook2 wrote: I remember being terribly excited once, [...] in a UK election after nothing but First Past The Post

my first experience of voting was at school - where we used the transferable vote system to elect major 'fishes'. it was quite an awakening when i got to vote 'properly'.
i, too, was disappointed with the referendum for electoral reform. it had the same level of explanation/information as the referendum that followed in '16 - and look where that's got us!

it's interesting that the beeb puts the earthquake at 5.8 and the daily mail puts it at 6.5...

after doing a load of other things for the past couple of hours it's now aftermorning so -
have a good day, everyone.
Top

scullion wrote:it's interesting that the beeb puts the earthquake at 5.8 and the daily mail puts it at 6.5...

I checked this site https://www.emsc-csem.org/#2, there have been at least 20 separate events recorded, we did not feel anything but I bet that Zosh did in Rhodes.

I have just discovered that one of our local supermarkets delivers to Souni, I must explore their web site.

I wondered about you and zosh when I heard the news this morning.

I was hugely disappointed with the referendum for electoral reform. It wasn't the PR system I wanted at all (I really do want one) and I always felt they selected it for that reason (I mean because others would have felt the same way, not just me!).

Gosh Wolfgirl, an outside light all night? I hope it doesn't shine into your bedroom like the one my neighbour has - it is activated by cats and foxes dancing in front of it all night - usually about 10 times an hour

Better get on with the last room and some washing, then I can do nicer things.
Top

I did a good bit of detective work today.
Our new hozelock reel bracket sheered and it fell off the wall. I contacted them and they asked for a copy of the receipt...
I remembered a conversation we'd had on the chat here, so I used search and found my post from 10 July, saying we'd bought one.
Quick trip to garden centre, armed with date/amount and copy receipt was duly printed off.
Of course, we bought some flowering winter pansies while there.
Top

Just goes to show that our "wittering" is useful

Dismiss our witterings at your peril!

Busybee wrote:Dismiss our witterings at your peril!

Witterings have lead to a successful replacement of the bracket
Top

Sloe-Gin wrote:Witterings have lead to a successful replacement of the bracket

KeenCook2 wrote:Uschi, so sorry to hear your diverticulitis has been playing up, glad it's improved. When OH got it he really thought it was the end of him.
Very interested that you "lent" both your votes to the SPD - I remember being terribly excited once, I think it might have been for the first London Assembly election (?), when I was able to "split" my vote in a UK election after nothing but First Past The Post - having done my PhD on German politics and being able to put into practice what I had read and written about

It reminds me what an anorak I used to be

Later today there's what promises to be a very interesting Economist webcast on the result.

Have a good day, all.

No annorak at all. These things are fascinating.
In this case our Social Democrat MP is simply such an outstanding person that there was no question he got my vote.

Right now there is a big palaver about who will go to bed with who ... we may have Angela Merkel delivering the next New Year's speech as Chancelorette still.

I bet she is glad that she decided to call it quits when she did. Wise woman.
I cannot be bothered to follow the minutiae of it all for the moment. We'll just have to wait and see.

As for the diverticulitis, I did have a few nights when I was worried, soaked in sweat. The big question - high temperature or hot flush ... I took my chances and went back to sleep. Must have been hot flushes.

On the plus side, tiny rations of well-chewed or pureed food have meant more than half a stone off my august figure. Being a little overweight does have its upsides - one can shed without much worry.
Things are moving in the right direction, so I am a happy, but still careful, bunny.
Top

I forgot, KC2, if you like you can find the various local outcomes here.

Scroll down to "Ergebnisse in den Wahlkreisen" and the Germany card and simply hover your mouse over the area of interest. Some of the East German areas are beyond redemption.
Top

Good Morning Campers. I managed to enter the all the goods for the supermarket delivery service, now it will not take my credit card. I have noticed in the past that the system does not early morning payments, perhaps it is not up yet!

WWordsworth wrote:Good morning.
BBC Breakfast is doing my head in today.
I find Sally Nugent irritating at the best of times, giggling and speaking over people.
But a combination of her and the StrictlyFest has made me switch off

Me too, also, as well plus any other appropriate words or phrases. I turn it on just before 7.00 for the local news and the headlines afterwards the switch it off now because as well as what you’ve said above she also has an annoying smirk.

Morning all. Torrential rain followed by an windy afternoon of bright sunshine and fairly warmish. Not today though it seems as it’s forecast for heavy rain from mid morning. I’ll probably have to think of a Plan B for today but at the moment nothing springs to mind.

Morning all. Gloomy and drizzly here. The family have just gone off to Abbot's. As I'm usually swimming I was around I had forgotten the sheer effort of getting three children up, fed and ready for school. At least in my day you weren't also having to prise them off their iPads!

I am still very bruised but the steristrips have fallen off and the wound is nicely healed. A friend, a survivor of breast cancer, asked me if I'd seen the implement used to take the biopsy sample. I explained that they'd told me to keep my eyes shut. "Oh, it's interesting" she said "It looks like a mini harpoon".

It was nice doing Quizzy Monday with my daughter last night. I'm very much liking Clive Myrie on MM too. Bake off tonight.

Son-in-Law is WFH today so I may escape to Brent Cross, Watford having been such a disaster last week. There doesn't seem to be any letting up in the fuel situation but I shall be OK until the weekend. OH has been called for his booster on Saturday at Harrow Leisure Centre so we just need to make it until then.

Have a good day.

PS. Uschi there is a lovely picture doing the rounds of Angela Merkel being covered in parrots!
Last edited by Pepper Pig on Tue Sep 28, 2021 3:39 pm, edited 1 time in total.
Top 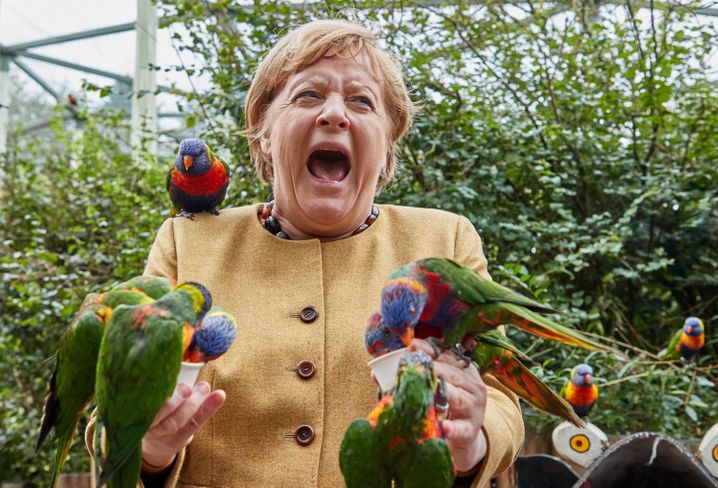 . Sunny here but I'm off for a woodland walk with friends this morning and the forecast looks a bit dodgy

Glad you're healing well, PP. Your friend reminds me of my father who , was thrilled to have an angiography and see his heart on a screen

Nothing danced in front of the neighbour's security light as I tried to get to sleep last night and I was asleep in no time. Perhaps someone equally annoyed by it has removed the bulb.

Hope the day goes well for all

. Oh dear, all Angela M. has done and she'll go down in history as the bird lady

Morning all from a dull but dry Harefield ... I think the sun is trying to break through

Another tiring day at daughter's, she needed some garden tools and other stuff, so we headed to the collection of stores under the M40 at Loudwater/HW junction. I keep waking very early these days, average 3.30am, so by early afternoon, I am fit to drop. However, still managed to prune 4 very straggly overgrown rose bushes bordering the strip between her garden and one of the neighbours - an Indian lady with 2 daughters who clearly have no idea what to do and was very grateful for my offer. This needed to be done as today she has a fencer guy coming to put fences down both sides of her boundary. The will need a clear run down that side. On the other side is a lovely lady who seems to have plenty of family visiting. She is about the same age as my daughter, but seems to have extreme OCD. Not one plant in her garden and it is covered with fake grass which she brushes 3 times a day. She also told DD that she showers every night, then every morning change her bedding !!!

Today just Zoom Fitsteps for me at 10am, then wait for my annual check up call from my Oncologist... then a bit of a tidy up all round as from tomorrow I have a cleaner

It will be lovely coming back from Fitsteps tomorrow to find the place clean and this will also encourage me to keep tidy - I can be such a slob.

I thought exactly the same last night PP ... He is so gentle with the contestants.

Hope everyone has a good day ..
Top

Good morning everyone,
Sunny here but there's a real nip in the air.
I'm pooch sitting today so had to be up an organised early (for me). He's snoozing on the couch and I could happily join him. More