Tasty. What fish is that, Sue.
I like your tablecloth too. I've just changed my Christmas one, for a light grey linen one. Very subdued.
Top

You had fish, too Stokey. Do like a fish stew.

What kind of stew did you make?

Lovely plate, Gill and I'm always nosey about your sauces! Sounds perfect. Bet Tony liked that. I could eat salmon fillet every night, but then I say that about gambas pil pil too!

I had some left over cooked venison that I'd set aside recently before going on to make a stew. It makes fantastic tamales, which is what I made last night. So simple, so good. Might post on the Latin thread - usually made with pork or beef, but venison is a real treat, so nice and also festive but lean and simple.

It was from a kg of frozen large pieces and too much for one dish. I did a basic browning with some bay leaves and wine/stock as a prep step to take off some of the very gamey flavour, one went on to become the stew and the other for something else.
.
Top

He's a meat eater convert, going from let's have meat for tea, to lets have salmon and a sauce.
Thank the Lordie.
Remind me how you make your gambas pil pil please?
Top

Gill I prefer pan sizzled to the oven. 250g uncooked prawns per person is perfect. For 2 people, 500g prawns, peeled leaving tail, sprinkle with 1/4 tsp salt, coarsely chop a few garlic cloves, gently heat a good glug of evoo in a large heavy frying pan with a a little piece of butter for flavour, add garlic, sizzle for a minute but don't brown, add 1/4 tsp chili flakes or to taste, add prawns laid flat, turn up heat if needed and sizzle umtil they begin to colour and curl up, flip and sizzle for another minute or to until just cooked thru. sprinkle with some paprika about 1/2 tsp, serve with lemon wedges. We like rice as a side for a meal.

All the mince pies are gone. No more smoked salmon.

And this is the last of my seasonal cooking. Fillet steak rare with chips, and a pepper sauce.
And a modest couscous salad last night, accompanied by avocado and red & chilli pepper.

Back to my usual cooking. 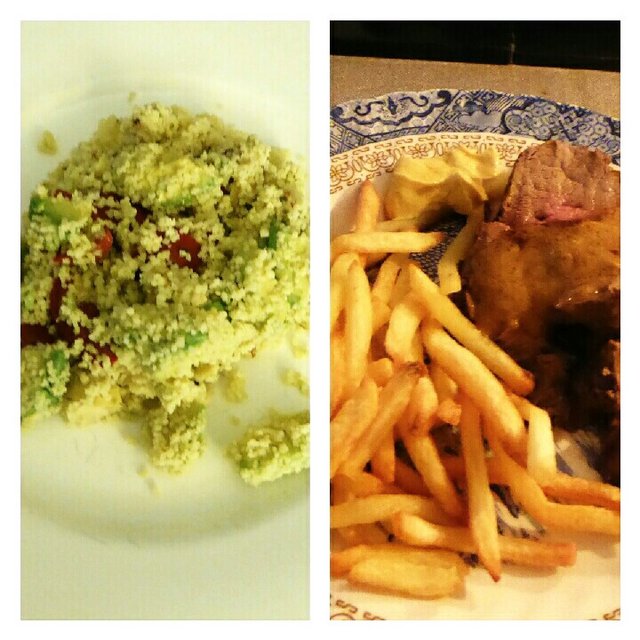 They are, Pampy.
I took the time to slice thinly the maris piper potatoes, rinse them, parboil (in the microwave), toss in a small amount of sunflower oil. And open freeze.
(the advantage of a new freezer is I have space to open freeze)

And cook them in the airfyer direct from frozen of course.
Top

Why thank you. Some go a bit wonky.
The trick is to shake them out into a bowl every 5 or so mins, to rotate them.
But the airfryer does perfect chips, it's an excellent gadget forrit.
Top

I made my 'Christmas pies' after Christmas (i.e pies filled with leftovers). I've only made them to bake and eat immediately before or frozen the filling to make a pie at a later date. This time, after chatting to you all, I made shortcrust pastry pies and froze the whole pies.

Would you cook from frozen or thaw first? I would always use a thermometer to check the middle was piping hot either way.
Top

I do similar and I thaw first just because I find it easier to guage when said pie is cooked through.
Food, felines and fells (in no particular order)
Top

They sound the business, EM.
I'd say thaw them, too.
( I think you have to thaw frozen supermarket pies, don't you?)
Top

Thank you! Yes, I think large supermarket pies recommend it. I don't always but always use the thermometer. I wasn't sure if the pastry would be nicer one way or the other. Will report back!
Top

If thawed overnight in the fridge and cooked directly from chilled, the pie isn't sitting around at room temp so no safety worry; also chilled pastry benefits from the shock of hitting the oven's heat blast apparently. An added benefit is less baking time from chilled and the top is less likely to burn before the inside is cooked through. Mmm pie....
Top

I would be worried about getting a ‘soggy bottom’