Sakkarin wrote:I thought it was rats for some time,

The cage traps are good for that situation - the ones that close as soon as the peskie thing goes in to devour the fat ball you've left at the bottom end of the cage.
Top

Just been for my daily walk to shut the greenhouse (at the bottom of the garden!) I put a tray of overwintering peas and broad beans into it that I'd been germinating in the house. Really should've used a deeper module tray as all the roots were out the bottom, even after a couple of days' worth of growth!
Top

We get stone martins in the loft of our French house...
And as for foxes... taken a year or two back in our garden.

This also makes me realize how much our shrubs have (over) grown...
Squirrels are annoying, as are pigeons. The pigeons eat most of the birdfood and scare off the little birds.

Yes I will probably deploy some chicken wire. I have not had a problem though when planting bulbs in November.

tbh I can't get worked up about any of these animals. It was was a worry when a fox kept trying to make a den under our decking at the previous house though. I like watching the foxes play in the field beyond our house. They have ripped open a few bags of compost and manure this autumn. Two bags of manure were almost in situ so they almost did a job for me.

I am thinking about doing some sweet peas. SR says December. I am worried about not having enough space to overwinter things.
Top

Four pix taken with fixed camera and Photoshopped together. 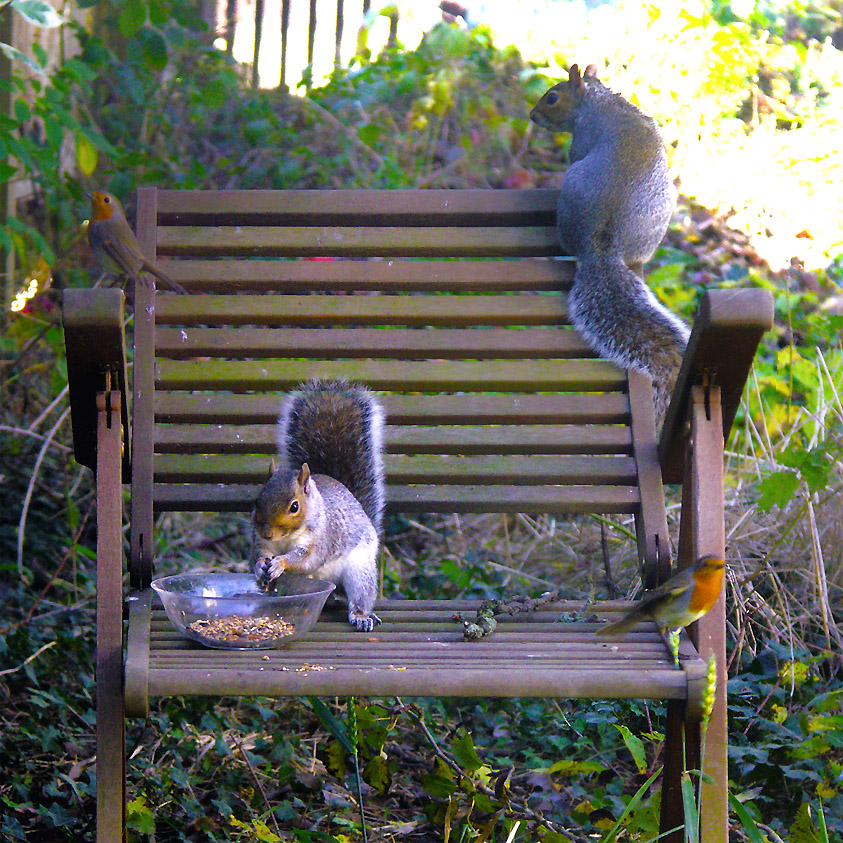 Lusciouslush wrote:I can well believe that Pampy - I've seen up close just how much they can put away - I used to let them have a bit before shooing them away - but there's no shooing them away - they just keep coming back & won't stop 'till they've polished off the lot! - they're so aggressive & many folk think they're cute

He greased the pole that the sunflower seeds hang off for a long time - that was really funny to watch - they'd jump on the pole & then slide down leaving their claw marks in the grease - the look on their faces was priceless......! Can't do that now tho' the trees have grown so much they can jump from lots of different perches.

The Lushly has his own method of dispatching them tho'.

very inventive! I can just picture the little blighters sliding down a pole!
Top

There's another 79p seed bonanza on Thompson and Morgan...
Top

I have a yen to sow seeds. What can I sow, given limited cold frame space?

I was thinking of getting one of those mini wooden greenhouses aka two tiered cold frames, but I fear they are not good value for money.
Top

You can sow Lamb's lettuce now ... perfect in a cold frame.
Top

Herbi - you can sow broad beans and then plant them out after about a month. Hardy annual flowers. Peas, as long as you can cover them (fleece is fine). Plant garlic direct. Peas for peashoots. Hardy herbs (parsley, coriander, dill). winter purslane. landcress. mustard/oriental greens. Some of these might be hardy enough to grow outside. (I'm not sure where you are!) You could even sow some carrots now (will need some protection).
Top

Isn’t the thing about sowing broad beans this side of Christmas to do with avoiding black fly in the spring?
Top

Pepper Pig wrote:Isn’t the thing about sowing broad beans this side of Christmas to do with avoiding black fly in the spring?

they are supposed to be less prone to it. or at least they crop before blackfly get too bad. I've always sown mine to overwinter. apart from one year, when i lost all the plants to blackfly. Also you get a nice early crop when not much else is growing.
Top

I agree Hope ... we were picking ours in mid May this year. Will he sowing ours in a week or so, as usual ... variety Aquadulce ‘Claudia’. Winter hardy and a good crop of great flavoured beans.
Top

Well I have a lot of broad bean seeds so might well try that.

I had a man round yesterday to do a quote for digging out the roots of shrubs so I can have my new flower bed. He made some derogatory comment about whoever put down 'plastic' (acutally a membrane to supress weeds.) I said that the whole garden had been laid to shrubs for minimum effort, I assumed, and whoever did it probably put the membrane down. He shook his head, and made a comment to the affect that some people just don't care about gardens. Then, he said "Well someone clearly loved this garden once. That's a lovely Camelia."

This actually resulted in an argument between husband and I, after he'd gone, as OH took this as a criticism of us for letting shrubs get too big (he resents me not letting him hack them back). i, meanwhile felt a bit insulted though after all the effort I have put in this year. It does look a mess at the mo as I need to do some serious tidying up, and some of the summer flowers arel ooking very sad and bedraggled (especially the rudbeckia.) I can't make it lovely on my own and I am not williing to let husband hack bushes back without deference to how or when they should be pruned.

The bloke probably wasn't really commenting on either thing! (Although the shrubs are becoming trees... but we've not been able to get any garden help since 2018 due t an apparent shortage of gardeners.

I am not sure the man will send us a quote. He said that his company is really a tree surgeon outfit. (I should have perhaps offered him a tree to do, too, as a sweetener.) But we shall see.
Top

Don’t let your husband prune the camellia!!! Unless it’s fine immediately after flowering you’ll lose all the next year’s flowers.
Top

I know! I don't think he's done it because it's never not flowered. Ditto the two rhododendrons next to it. (They flower in succession

The wisteria, which was once gorgous, never flowers anymore because he hacks it back whenever he feels like it. (It once went up into the guttering which is deeply problematic as there is no access to it down the side of the house, so he is worried about a repeat.) He has strict instructions not to prune anything without asking me first.... hence him being resentful that the shrubs are overgrown, because I usually say 'no'. Thing is, he's not keen on paying anyone to do it either. He doesn't like spending money on the house and garden, but nor is he prepared to do much himself, or do it carefully, on the whole. Sigh. When this (Covid) is over/less bad, I should go on a course.

Anyway, I will be paying this chap's company to thin out the shrubs/take runners out (OH after hearing him talk about it: "Oh, we could have done that ourselves."...) if he is willing - if not, someone else, and dig out the roots.

I bought quite a bit of bedding in the garden centre. I went to one (well some, actually) recommended by Linnet. A few terracotta pots too. (Notice some people are selling plastic pots as terracotta now. It seems to be synonymous with the colour rather than the material.) Will put plants in tomorrow. I am a bit worried about the 'design' of it though. Not my strong point. Lots of violas, pansies and a few cyclamens. I really need something a bit taller for contrast?

I have foxgloves to put in elsewhere, sown later summer. Also need to set up my cold frame to put some babies in. Not sure whether to keep it on the balcony (very sheltered. Too warm?) or try to bring it downstairs. (It might fall apart...)
Tomorrow...
Apologies for wibbling.
Top

Only garden I did today was pulling off some of the old, rather nibbled brassica leaves and having a little check on my babies in the greenhouse. More tomorrow, hopefully. Still recovering after my long walk (ha!) yesterday!
Top

I did about three hours and it wiped me out. Put a load of bedding out the front and did some tidying/chucking out of things. I have a big just of assorted peppers (alas, mainly green), chillies, a very tiny aubergine and a couple of tomatoes!
Before my seriously needed sleep, I went out and bought some more bedding and compost. Local garden centre prices are not double other places. I don't mind paying a bit extra to support a local business but this was ridiculous, and they had very little stock and nothing out of the ordinary. I wonder if they are winding the business down. Sad. Ended up going to B&Q who had a lot of trays of things - violas, pansies, sweet williams, dianthus etc. for a £1 and a decent selection of different types and brands of compost at an affordable price.
I shall try really hard to squeeze some gardening in during the week. I am sure it's good for me. But I have a hideous work week ahead, potentially.
Top